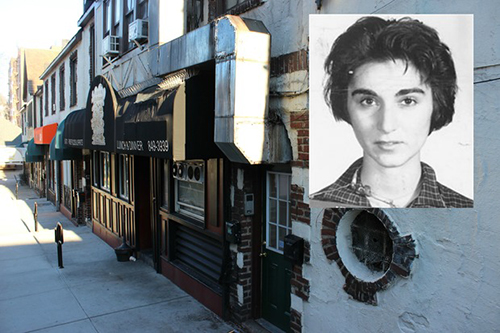 QUEENS — Kitty Genovese’s neighbors — who did nothing to help her as she was brutally raped and murdered in Kew Gardens 50 years ago — were even more indifferent to the young victim’s screams than has previously been reported, according to a new book.

Genovese, who was 28 years old when she was killed on March 13, 1964, in the hallway of her two-story apartment building on Austin Street, is the subject of a new book by Catherine Pelonero, who re-examined the case and found many new details about one of the most infamous murders in New York City history.

In her book, Kitty Genovese: A True Account of a Public Murder and its Private Consequences, [link to Kitty Genovese page on my site] scheduled to be published in March, Pelonero gives a detailed and chilling account of Winston Moseley’s fatal attack on Genovese.

Shortly after the murder, police found numerous witnesses who had seen the attacks, which continued over the course of half an hour in the heart of the neighborhood, next to the Kew Gardens LIRR Station. But no one intervened until it was too late.

In an article about the murder, Martin Gansberg, a New York Times reporter, wrote that “for more than half an hour 38 respectable, law-abiding citizens in Queens watched a killer stalk and stab a woman,” but “not one person telephoned the police during the assault.”

The story — which led to numerous social analyses of the phenomenon that became known as “Genovese syndrome,” or the bystander effect — was later questioned. Residents claimed they did not see the entire attack or they did not understand what was going on.

But Pelonero said that after researching the story for seven years, she concluded that the level of indifference among residents was even “worse than what The New York Times actually reported.”

Pelonero meticulously reconstructed the sequence of events, based on witness statements in the police reports, trial testimony and Moseley’s confession.

After Genovese was stabbed on Austin Street, close to where Austin’s Ale House is currently located, she managed to crawl into her apartment complex, where she lay in a hallway near her friend Karl Ross’ apartment for close to 10 minutes, calling for help, Pelonero said.

“Kitty laid in that hallway calling up the stairs repeatedly for help, long enough for her ‘friend’ Karl Ross — whom she called to by name — to open his window and scurry across the roof to another neighbor’s apartment, where they both then stood talking at the window about what they should do amidst Kitty’s cries that she had been stabbed,” Pelonero said.

“I don’t want to get involved… I think she’s drunk,” Ross told his neighbor, according to the book.

They also decided to call another neighbor, who lived near Genovese’s apartment on the other side of the complex and ask her to check on the woman screaming in the hallway, Pelonero said.

Meanwhile, Moseley returned, found Genovese, raped her after slashing her throat to silence her screams, stabbed her numerous times, mostly in the stomach, and left her to die.

“When you think of how many long minutes she was down there — not to mention the fact that her bloody handprints and drag marks on the wall indicate that she was trying to claw her way up the stairs — and that some people admitted hearing her repeated pleas, I think the horror of what happened that night really starts to sink in,” Pelonero said.

Ross eventually did call the police at about 3:50 a.m., half an hour after Genovese was first attacked. She died on the way to the hospital.

Pelonero said that her goal in writing the book was also to find out who Kitty Genovese was.

“I wanted to give her an identity beyond iconic victim,” she said.

Genovese, who grew up in Brooklyn in a close-knit Italian-American family and went to Prospect Heights High School, had “a very dazzling personality,” Pelonero said.

“She was very funny and she was also an extremely popular student,” she said, adding that Genovese was also compassionate and “would go out of her way to help other people, which is really ironic.”

Genovese was also very ambitious and she was planning to open her own restaurant or tavern, according to Pelonero. She was working as a bar manager at Ev’s Eleventh Hour Sports Bar on Jamaica Avenue and 193rd Street in Hollis when she was killed.

The author, who corresponded with Moseley for many years, also reveals many details about the killer’s personality.

Pelonero describes Moseley, who was denied parole for the 16th time last November and remains in prison, as “quite intelligent, well-spoken and very articulate.”

Moseley, a machine operator from South Ozone Park who was married and had three sons, also killed another woman, Annie Mae Johnson, two weeks before he murdered Genovese.

“What surprised me was how little insight he had — not just into the crime that he committed but into himself as a whole,” Pelonero said.

Pelonero said she hopes readers of her book will become more proactive.

“If you think someone might be in trouble, err on the side of caution,” she said. “If just one person had called out to her, ‘Do you need help? Should I call the police?’ — the whole story could have been different.”