The Truth About Kitty Genovese 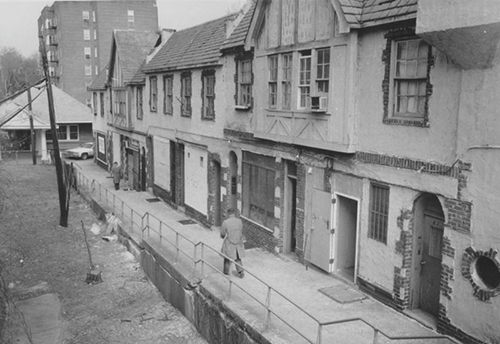 A little knowledge is a dangerous thing.

The 21st century revisionism of the iconic and infamous 1964 murder of Kitty Genovese, the young woman attacked on a street in Kew Gardens, Queens and slain in a hallway of her apartment building while her pleas for help went unanswered, gives a glaring example of this old maxim.

Indeed, little bits of knowledge about what happened the night Genovese died—a fact here, a factoid there; speculation, spin and select pieces of a larger narrative—have been variously patched together in recent years by would-be debunkers.

They have sought to transform the horrifying ordeal of this woman dying while her unresponsive neighbors failed to act into something far more sanitized than what was reported at the time. Their new-and-improved, it-really-wasn’t-so-bad-after-all version is based on a stubborn insistence that the original account was a myth invented by an overzealous reporter.

As the author of a new book on the killing, on which I devoted seven years of research and inquiry, I want people to know: Though some details of the initial story may have been incorrect, the fundamental narrative holds up to scrutiny. Genovese’s neighbors failed her, and that likely cost her her life.

Genovese’s murder gained instant notoriety and worldwide attention back in March of 1964 when The New York Times printed an article on its front page with the headline, “37 Who Saw Murder Didn’t Call the Police.” Written by reporter Martin Gansberg, who had spent two days in Kew Gardens researching the story, the article gave a detailed account (attributed to detectives and witnesses found and interviewed by Gansberg) of the harrowing final half-hour of 28-year-old Genovese’s life.

Driving home to Kew Gardens in the wee hours of March 13, 1964, Genovese had been followed by a man named Winston Moseley, a stranger, who later told police he had been driving around that night looking for a woman to kill.

Gansberg’s article recounted Moseley’s stalking and stabbing of Kitty, her screams for help, Moseley’s retreat after a neighbor yelled at him to “leave that girl alone,” and his return to hunt and kill her. The article claimed Kitty had been attacked three times over a half-hour period while 38 of her neighbors heard her screams and watched parts of her ordeal, but failed to help or call police until it was too late.

Only one of the 38 eventually called police; the other 37 did not. Emphasized was the fact that this happened not in a crime-ridden ghetto, but in a good, clean, middle class neighborhood populated by, in Gansberg’s words, “respectable, law-abiding citizens.”

It was a shocking story, horrible to contemplate in its implications of the human condition (or the inhuman condition of New Yorkers, as some saw it). It caused a sensation. It left a mark of shame on the quiet community of Kew Gardens. Explaining the chilling collective callousness of Genovese’s neighbors would become a staple of psychology classes for decades to come.

Then, over the years, came the debunkers—attempting to turn a stain on New York City’s conscience into something far more innocuous.

The debunkers claim far fewer than 38 people saw what was happening to Kitty.

They insist that most who saw or heard didn’t understand she needed help.

Additionally, they claim some people did call the police that night, although this seems to contradict the claim that the witnesses didn’t know Genovese needed help in the first place.

My closer look at the actual existing evidence via police reports, trial transcripts (in their entirety as opposed to select bits), and, perhaps most telling of all, statements made by witnesses and residents at the time to reporters from long forgotten newspapers, suggests that rather than shedding new light on an iconic crime, so-called debunkers have instead produced a PG-13 version of the Genovese murder, edited for content—and obscuring the truth.

To be fair, there are errors in the famous New York Times article. Gansberg wrote there were three attacks, but Winston Moseley’s confession and court testimony claimed only two. This discrepancy was acknowledged by the Times in 1964 in their coverage of Moseley’s trial.

Gansberg did not fabricate an extra attack; at least two witnesses told police they thought Kitty had been assaulted an additional time. It’s also true—and this is a major point to the revisionists, the smoking gun that supposedly proves the whole story is a myth—that all 38 people did not watch for all 30 minutes. The problem with this “revelation” is that the famous Times article not only described Kitty’s final journey around to the back of her apartment building; it also included an overhead photograph with arrows showing her path.

Obviously, Genovese did not remain in view of witnesses in the front of Austin Street after she finally managed to stagger around the corner. To say that the New York Times attempted to fool people into thinking otherwise is disingenuous.

At any rate, perhaps the best response to the stubborn effort to debunk comes from one of the original case detectives who was there that morning, questioning these witnesses. He said to me: “Come on, the woman has been screaming, staggering down the street. How much do you need to see?”

The origin of the number 38—which has also been hotly disputed by those seeking to unravel what they believe is a myth—falls in a gray area. Months after the publication of Gansberg’s article, New York Times editor A.M. Rosenthal wrote a short book, “Thirty-Eight Witnesses,” in which he claimed it was Police Commissioner Michael Murphy who first mentioned the number. People close to Gansberg, who passed away in 1995, say that Gansberg counted the witnesses for his article himself. At this point it is likely impossible to discern exactly where the notorious number came from.

In his book, Rosenthal also diminished Gansberg’s standing, referring to him as a “copy editor” and “new at reporting.” In doing so, Rosenthal unwittingly lent fuel to the latter-day revisionists who cite this as proof that Martin Gansberg was a cub reporter eager to make a name for himself.

In reality, Gansberg at the time was a 22-year veteran of the New York Times, neither inexperienced nor in need of a career boost. Gansberg had served as managing editor of the Times international edition. He had asked to step down from management to return to reporting, a profession he revered.

The more important point is: If anything, the number 38 is in some sense an understatement.

According to police reports, 62 people admitted hearing Kitty’s screams. Many of them did not see anything when they looked out their windows (or told police they hadn’t looked). But about 30 admitted seeing part of Kitty’s ordeal. What and how much they saw varied, but two things are certain: All those who went to their windows did so in response to the screams of Genovese, and many remained for a prolonged period of time. Testimony from trial witnesses confirms this, as do the contemporary press interviews.

As one man (who did not testify at trial) told LIFE magazine, “I woke up about the third scream . . . I forgot the [window] screen was there and I almost put my head through it trying to get a better look. I could see people with their heads out and hear windows going up and down all along the street.”

One thing even the revisionists concede is that a great number of reporters descended on Kew Gardens in the wake of the explosive Times article. This long-lost news coverage from defunct papers such as the New York Journal-American and Long Island Star-Journal, to name but two, supplements rather than contradicts the Times account. They contain many interviews and quotes, gathered while memories were fresh and consciences hurting.

“Of course I heard the screams,” one woman told the Long Island Star-Journal. “But there was nothing I could do. I was afraid. My hands were trembling. I couldn’t have dialed for an operator if I’d tried.”

Others took a defiant tack, such as the woman who told reporters from the New York Journal-American, “That was none of my business. I attend to my own affairs.”

At the chilling end of the spectrum was the man who, according to the Journal-American, said of Genovese’s screams: “At one point I thought maybe a girl was being raped—but if she was out alone at that hour, it served her right.”

Completely absent are any claims that anyone called the police before the single call noted at 3:50 a.m., a half-hour after all sides agree that Genovese was first attacked.

The first rumblings of a suggestion that maybe someone called the police after all seems to have coincided with the 20-year anniversary of the murder in 1984. By this time, most of the witnesses had died or moved away, so it was not they but their former neighbors who made blanket statements to reporters—without giving any names or specifics—that the cops had been called.

If anyone really did call the police that night, we have to wonder why none of them said so back in 1964, when Kew Gardens was crawling with reporters from rival newspapers, hounding residents for any new tidbits of information. That would have been quite the scoop.

Don’t believe the mythbusters. A young woman was attacked. She screamed. She wept. She cried out, “Help me. Please, if somebody doesn’t help me I am going to die.” That’s what at least one witness heard, according to a statement she gave police. Dozens of her neighbors who had good reason to know full well that a crime was in progress chose not to get involved.

Even so, the stigma on Kew Gardens is the only thing worth reconsidering. The witnesses weren’t chronically hard-hearted New Yorkers who couldn’t bother with intervening while a neighbor was murdered. They were normal people hobbled by a mix of fear, self-interest and apathy. We all fail at times, and how bravely we behave varies from day to day, moment to moment.

Herein lies the value in recalling the murder of Kitty Genovese in all its disturbing, depressing reality: not to engage in pointless debates about how many witnesses, but to inspire us to fail less often.