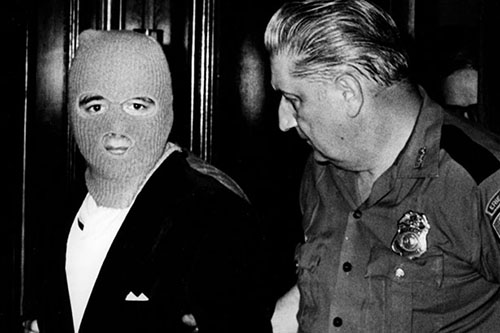 He didn’t immediately realize that he was bleeding. Several moments passed from when the man struck 25-year-old John Adams in the chest until Adams fell to the ground. His attacker, a white man wearing wire-rimmed glasses, hopped on a 2 train. It was almost noon on Monday, Dec. 22, at the IRT station on 14th Street and Seventh Avenue.

A couple of hours after Adams was stabbed, a man named Ivan Frazer rode the E train in from Queens. When the train stopped at the 53rd Street Station, a passenger got up and took a swipe at Frazer—who caught the blow and threw the man against the door. They both got off the train and Frazer yelled at the man, who pulled a knife from his pocket. People on the platform fled.

Frazer ran, too, when he noticed the blood dripping from his hand.

Two hours later, 19-year-old Luis Rodriguez was accosted by the man with wire-rimmed glasses on Madison between 40th and 41st. After a brief altercation, during which Rodriguez’s wallet was taken, the man stabbed the teen in the chest. Rodriguez was taken to a hospital, but doctors could not save him.

Four hours after that, at around 10:40 p.m., on 49th between Broadway and Seventh, 20-year-old Richard Renner was stabbed. He died as well.

And before the clock struck midnight on that terrible day, on 33rd Street between Seventh and Eighth avenues, a man named Carl Ramsey was dealt a fatal knife wound to the chest.

The year 1980 was a banner year for evil in New York City. It had more reported murders, robberies, thefts and other crimes than any year since such records had been kept. It was the year John Lennon was shot to death outside the Dakota.

But the Christmastime stabbings were shocking even for New York City and even for that year: a 12-hour spree that left four men dead and two wounded. They were all the work of an assailant the press dubbed the Midtown Slasher.

Police didn’t have much more to go on than sketchy descriptions of the Slasher’s race and eyewear. There was one other peculiarity about the knife attacks that caught investigators’ attention: All the victims were black or dark-skinned. That detail and the random hit-and-run nature of the attacks gave NYPD detectives pause. It brought to mind a series of murders of black men in Buffalo in September of that year.

The Buffalo killings were equally chilling — and in a city less than one-tenth the size of New York City, they reverberated even more widely. Four black men separately had been gunned down by a slight white male suspect, who then disappeared. The same gauge bullets were used in all the shootings, and the press in Buffalo called the malefactor the .22 Caliber Killer.

Although the weapons were different, the other aspects of the cases sounded similar. Even though Buffalo and New York City are nearly 400 miles apart, investigators from Buffalo and the Big Apple wondered if the two towns shared a serial killer bent on offing black men.

As if to underscore that suggestion, two more black men were stabbed to death in Western New York — one in Rochester and one in Buffalo — at the end of December.

New York state’s bloody year and its aftermath are brought to life in Catherine Pelonero’s new book, “Absolute Madness: A True Story of a Serial Killer, Race, and a City Divided” (Skyhorse Publishing).

Buffalo and its satellite communities had a major investigation into the .22 Caliber killings, with more than 100 law-enforcement officers pursuing leads.

But the break in the case came from an unexpected source: the stockade of the US Army base at Fort Benning, Ga. In January of 1981, a new recruit by the name of Joseph Christopher was taken into custody by military police after he attacked a fellow soldier — a black man — in the shower with a knife[i].

Christopher exhibited signs of odd behavior both before and after the shower attack. He shaved his own head with a razor, and he was convinced that the Army was poisoning his food. He showed up in formation wearing flip-flops. After his arrest for the shower [sic] attack, he wrote strange letters to his family in Buffalo, and guards stopped him in the process of trying to cut off his own penis. He twice attacked a fellow prisoner, who was black, and had fought with black and Puerto Rican guards. He also mentioned that he had killed some people in Buffalo and in New York City.

That admission in and of itself was not any weirder than the other things Christopher had done. But in light of his unprovoked attacks on black men, it prompted an Army investigator to contact the Buffalo police. That set in motion a seemingly endless series of trials, psychiatric evaluations and legal motions to adjudicate Christopher’s guilt and his sanity.

Mental health was at the heart of Christopher’s case and his crimes. Christopher’s descent into madness was gradual. He was deeply affected by his father’s death in 1976. In 1979 and before the New York slashings in 1980, he mentioned to friends and family that he felt something was wrong with his head. He told his ex-girlfriend, “I’m all nuts’d up.” He became depressed and socially withdrawn. He sought help at the Buffalo Psychiatric Center in early September 1980. Tragically, he was dismissed after a 30-minute interview — and started killing just weeks later.

“We have to have better treatment for the mentally ill in this country,” Pelonero tells The Post. “There’s pretty much nontreatment at this point. And certainly, if somebody presents themselves at a psychiatric hospital and asks to be admitted, I think that should be taken seriously.”

Christopher’s warnings about himself went unheeded, and he went on to enlist in the Army, which, remarkably, accepted him. The .22-caliber killings in Western New York happened before he left for Fort Benning. He committed the Midtown Slasher killings during his Christmas leave from basic training.

The killings stoked racial tensions in Buffalo where, Pelonero writes, “pervasive fear, blind rage, and acts of agitation . . . had elevated the situation to crisis levels. The change in the atmosphere was palpable.” A black police officer observed at the time, “This isn’t the same city of Buffalo we knew one month ago.”

Defending Christopher would have been a challenge in the best of circumstances, but the Midtown Slasher proved to be hostile to his own defense counsel. He wouldn’t even acknowledge one of the lawyers, hired by his mother, and had few helpful words for the other. Against their advice, Christopher demanded a judge trial instead of a jury trial. He was found guilty of three counts of murder in April 1982. The conviction was overturned two years later. A series of psychiatrists evaluated Christopher throughout his imprisonment, producing a range of diagnoses. His defense attorneys tried to put forth an insanity plea, but ultimately, Christopher was declared competent to stand trial. He was sentenced to life behind bars in 1985.

Despite the racist nature of Christopher’s crimes, Pelonero notes that he was not known for his racial animus.

“There were people in Buffalo who found I was writing this book, and a couple of Christopher’s black friends sought me out to tell me, ‘I don’t know what happened to Joe, but he wasn’t a racist. There’s gotta be more to this story,’ ” she told The Post.

Regardless, it’s likely we’ll never learn. Christopher remained silent while in custody, and he died of cancer in 1993, at the Attica Correctional Facility[ii].

“It could be,” Pelonero writes, “that the answers were lost long before his death, askew and unrecoverable from the murky depths of a diseased mind.”

[i] Christopher attacked fellow soldier Leonard Coles in the barracks, not in the shower.