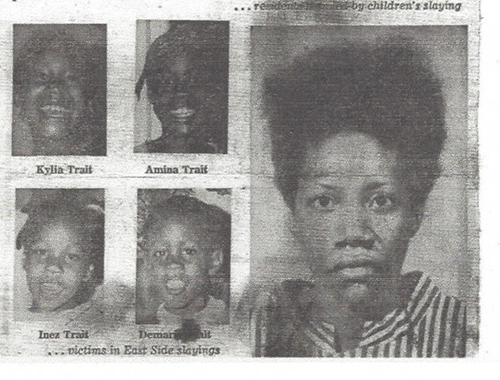 It was late on the night of Sunday, July 16, 1978 when neighbors began hearing terrible shrieks coming from the upper flat of a two-family home at 122 Montana Avenue in Buffalo, New York.

One of them thought Gail Trait was “whipping the kids.” No one called police until after the screaming had stopped—and until after Trait, a 26-year-old mother of four, stumbled out the front door of her home, covered in blood.

A distraught neighbor of Gail Trait

Lena Jones was sitting in the kitchen of the lower flat visiting with Gail Trait’s landlady, Louise Peterson, when the commotion started. Lena said she feared “that something weird was going on, the way the children were carrying on,” and asked Louise Peterson if she could go upstairs to see what was wrong.

Mrs. Peterson wouldn’t let her. “She told me it was none of my business,” Lena recalled. Ignoring Mrs. Peterson’s advice to mind her own business, Lena went out to the porch and rang Gail Trait’s doorbell several times. The door flung open and there stood Gail Trait, her hands, arms and clothes drenched in blood.

“You are not my mother!” Gail reportedly screeched as she pitched forward and collapsed on top of Lena, who screamed for Mrs. Peterson to call the police.

An ambulance rushed Gail Trait to the Erie County Medical Center. The amount of blood on her led paramedics to assume she was injured. That blood, however, had not come from any wounds on Gail Trait. The source was found upstairs.

The mangled bodies of Trait’s four children were, in the words of one veteran homicide detective, “The worst thing I’ve ever seen.”

In a scene more akin to a horror movie than real life, police found the bodies of Gail Trait’s daughters, Amina, 6, and Inez, 4, awash in blood on the living room floor. Both had been stabbed multiple times in their chests. The couch was saturated with blood. The television was on. It appeared that the two little girls had been watching TV when they were attacked.

Even more gruesome was the sight police found in the kitchen.

Oldest daughter Kylia, 9, lay on the floor next to the body of her brother, Demario, age 2. The two children had been stabbed numerous times, but they had also been partially dismembered.

The medical examiner would later determine that Kylia had 63 slash and stab wounds and had died of massive hemorrhaging. Baby Demario’s right leg had been hacked off at the hip and his right hand had been cut off at the wrist. His eyes had been gouged out. The severed parts sat on the kitchen table next to an open anatomy book that was smeared with blood. A bowl of blood was also found on the kitchen table along with a plastic container containing Demario’s eyes. The murder weapons were also found: a 13-inch butcher knife and a 7-inch paring knife.

After washing the blood off Gail Trait, hospital personnel found that her only injuries were minor cuts on her hands. Homicide detectives immediately brought her in for questioning while officers spoke with her neighbors, friends, and family.

Whisperings about voodoo cropped up immediately. Police were told that Gail Trait practiced voodoo and black magic and that Gail believed she was under a voodoo curse. As for what had happened that night, neighbors reported they heard Gail repeatedly yelling, “Tell me I’m your mother!” as the children screamed.

The apartment where the incident occurred belonged to Gail’s mother, Dorothy Williams, who was not home at the time. Gail had been separated from her husband for a year and had just moved herself and the four children into her mom’s apartment on Saturday night, little more than 24 hours before they were killed.

At police headquarters, Gail kept cops guessing with her “voodoo ramblings,” as Detective John Regan recalled. Detectives were skeptical. When Trait responded with gibberish to a request that she enter a holding cell, Detective John Ludtka had had enough. “I’ll give you five seconds to get in that cell,” Ludtka told her. Gail smiled at them and calmly complied. “About a half hour later, she came out and gave us a statement,” Detective Regan said in an interview with me.

In her videotaped confession, a calm and cool Gail Trait stated, “You would probably say this was murder, but it wasn’t murder to me.” She explained that she had done it to save their souls, that they “weren’t my children until I killed them.”

She continued, “After I stabbed them, they confessed they were my children. After I did it, I told them to say I was their mother.” She denied being angry with the children and stated that she loved them, but “they had to tell me they were my own kids.”

In court later that morning, Gail stood mute and appeared to be “in a bit of a daze” to Judge Joseph S. Mattina, who postponed her arraignment pending a psychiatric evaluation.

Meanwhile, investigators were uncovering possible motives of a more mundane nature than voodoo. Gail Trait had voluntarily placed her children in foster care on May 17 but they had been returned to her, at her request, on July 7. Gail had told people she put the kids there in order to further her education. She was a student at Erie Community College and had told friends and family she wanted to be a nurse. A check of her school records revealed she had recently earned an A in one course: anatomy.

According to her estranged husband, Gail’s family practiced voodoo and black magic, though Gail did not. Charles Trait told investigators he had left his wife because she was “popping pills.” Though Gail had told him that she planned to study nursing and eventually move to Atlanta with the children, her husband claimed social services informed him they were investigating claims of child abuse and neglect lodged against Gail and that the children had been accepted into foster care to give Gail a chance “to get herself together.” It wasn’t clear why social services had returned the children to their mother after only a month and a half. Some of the children had reportedly told Gail that they liked and missed their foster mother.

Interviewed shortly after the murders, the foster mother described the four children as “beautiful and well mannered” and said that the three girls were all good students. She confirmed that Mrs. Trait had voluntarily placed the children in her home.

Despite what others told police about an alleged voodoo curse, Gail denied that voodoo had motivated her. She admitted her belief in voodoo and black magic but claimed the bowl of blood on the kitchen table had nothing to do with that. She insisted the murders were done to “save their souls.”

Defense attorney Carl Vizzi saw it as his job to save Gail Trait. Never shy about speaking with reporters, Vizzi played up the voodoo angle in the press and in court. He served a subpoena on Buffalo Homicide Chief Leo Donovan demanding the surrender of “black magic and voodoo items” he alleged had been collected at the scene, including four voodoo dolls he claimed police found burning on the stove.

While conceding that they had recovered the anatomy book and the bowl of blood, police denied finding any voodoo dolls. Prosecutor George Quinlan agreed. “I was at the scene and I saw nothing of the sort,” he recalled to me.

Carl Vizzi entered an insanity plea for his client. He also filed a wrongful death lawsuit against the county on behalf of Gail Trait. The suit blamed the county for the murders, charging that the Department of Social Services was “grossly negligent” in returning the kids to their mother’s custody. It sought damages of $40 million—$10 million for each child—to compensate Gail Trait for the “wrongful death” of the children she had allegedly murdered.

A wrongful death lawsuit was also filed against the state by Dorothy Williams, Gail’s mother, claiming that a loss of welfare benefits had forced Gail Trait to seek the return of her children. If Gail’s welfare benefits had not been cut off when the kids were placed in foster care, the lawsuit argued, Gail would not have needed to get the children back and they’d most likely still be alive.

As for the murder charges, Carl Vizzi was able to have the trial delayed with various motions and demands for mental competency evaluations of his client. When the murder trial finally began in late November of 1979, Vizzi readily admitted to the jury that Gail Trait had killed her children.

In addition to hearing psychiatric testimony from both the prosecution and the defense—with experts on either side disagreeing on the question of Gail Trait’s sanity—the jury viewed her videotaped confession. Defense attorney Vizzi pushed detectives on the stand about the alleged voodoo evidence, accusing them of suppressing it. Detectives denied this.

When medical examiner Dr. Justin Uku took the stand to describe the massive wounds inflicted on Amina and Kylia, the defense attorney asked him if a person wouldn’t have to be in a psychotic state to inflict that number of wounds. “It’s not normal behavior,” Dr. Uku replied.

Prosecutor George Quinlan presented jurors with a very different motive. Investigators had learned that Gail Trait had an aunt in Atlanta, Georgia who had offered to take the children to live with her so Gail would be free to pursue her nursing studies. Days before the murder, family members in Buffalo had convinced the aunt to withdraw her offer of taking the children back to Atlanta because they didn’t want to see the children move away.

“That’s what set her off,” Quinlan believed. In his opinion, Gail Trait was a woman with above average intelligence who felt her life was in a rut. “When her aunt offered to take the kids, Gail was elated. When her other relatives ruined that for her because they didn’t want to see the children go, Gail was furious,” Quinlan told me. “She was going to show them that the children were ‘going’ whether they liked it or not. By no means was she a raving lunatic.”

Gail Trait was convicted on four counts of second degree murder. Attorney Carl Vizzi said he was “shocked” by the verdicts and vowed to have the case tried in New York City if he won a reversal, adding that, “The insanity defense is alive and well in New York City.”

Gail Trait reportedly showed no emotion when the verdict was read. While awaiting sentencing at the Erie County Holding Center, she tried to set herself on fire by holding a lit match to her gown. A deputy used a fire extinguisher to douse the flame and Gail was not injured. At her sentencing in February, 1980, Gail Trait was given a prison term of 25 years to life.

Carl Vizzi eventually got his wish for a reversal of Gail Trait’s murder convictions, but it took far longer than he might have hoped. Trait’s convictions were reversed after Gail had been in prison for 10 years—on the grounds of incompetency of counsel.

Trait had a second, non-jury trial in Buffalo. Ironically, the insanity defense made a little more sense this time around. George Quinlan, who also prosecuted the second trial, told me, “She was so doped up by then. Completely out of it.” Years of receiving psychotropic meds in prison had reportedly turned her into something of a zombie.

Gail Trait was found not responsible for the crimes by reason of insanity and spent two years in a mental hospital. Her current whereabouts are unknown. Neither Gail nor her mother ever collected for the “wrongful death” of the children. Both lawsuits were thrown out of court.

Share this:
← Previous Post: The Truth About Kitty Genovese Next Post: Imagine a black Kitty Genovese: Winston Moseley, her murderer, asked an important question about race and justice →